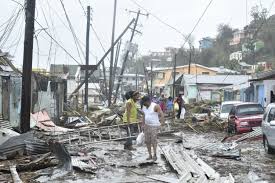 A family stands amongst the rubble of their destroyed house after Hurricane Maria destroyed much of the island's infrastructure.

Just because Hurricane Maria hit Puerto Rico back in September doesn’t mean that it should be forgotten about. Here in Schaumburg we have been able to go about our daily lives like nothing has happened but on the island the exact opposite is true.

“Citizens are living like it’s the past,” says José Montes, a Puerto Rico born citizen. In fact, Puerto Rico is part of United States territory. This means that anyone born in Puerto Rico is a US citizen. Many people don’t realize this, because the island is not one of the 50 states. In fact, a study shows that only 37% of people ages 18-29 know this fact.

It makes one wonder that if a majority of Americans knew that Puerto Ricans are United States Citizens, then help would have arrived earlier than November and December. Statistics show that for two months over half the island was without power, many people were still without clean drinking water and a number of stores were closed. Now, just over half of the power has been restored. The official hurricane death toll was 64, but lack of power and water accounted for quite a few more. Critics believe that the number is much higher, due to increased number of cremations and bodies at mourges. In addition to this, over 100,000 people have left the island.

Would all of this still hold true if Maria had hit a state on the U.S mainland? Would people still be without cell service, water, wifi and stores? President Trump’s reasoning for this is that “It’s very tough because it’s an island… In Texas, we can ship the trucks right out there, you know, we’ve got A-pluses on Texas and Florida and we will also on Puerto Rico, but the difference is this is an island sitting in the middle of an ocean, and it’s a big ocean.”

In reality Puerto Rico is only 1,014 miles from Miami Florida, less than one fourth of the entire ocean’s span. There are also planes, helicopters and boats. Transportation isn’t as much of a problem as it looks to be. So why is it that FEMA has just recently started bringing aid to the island when residents had been needing them for months?