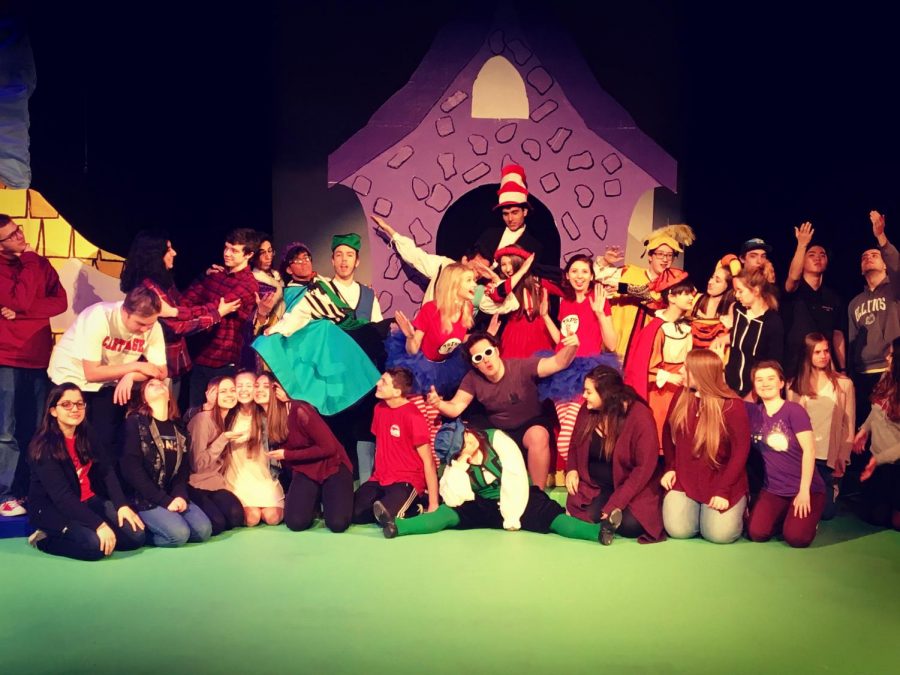 What happens when you take Dr. Seuss and Shakespeare and blend them together? The Schaumburg High School theatre department answered that question as they transformed the stage into a Seussified wonderland for the winter play, “The Seussification of Romeo and Juliet,” which opened February 15 and runs through February 17.

“This is a unique and fresh take on Romeo and Juliet,” according to senior Adam Stieber, the actor playing the part of Romeo. “It is a fun show to do.”

The short, 45 minute play stays true to the plot of the original but gives it a playful spin. In the process, student actors transformed themselves into different, wacky characters.

“You don’t want yourself on stage,”  Saif Ali, playing the part of Mercutio, said. “You have to change the way you walk, the way you talk, and the way you interact with other people. You have to completely change yourself for the duration of the play.”

“Seussification” is a colorful, witty play that, as senior Olivia Donofrio puts it, “is short, too. “Many people don’t want to go to the theater because it will be like three hours, but this is just over half an hour!”

The fun-filled show also came with a highly energetic cast. Everyone on the cast is very different from each other, but all share one thing- energy. This passion and vigor is needed when putting on such a highly demanding show as this one. “I’ve been having a blast with the cast,” said senior Cameron Kidd, SHS’s Juliet. Kyra Howard, a freshman, agrees. “The best part is working with the cast and making a family out of it.”

The cast was not the only “family” involved with this production. Tech worked for weeks before production making sure the stage, set, and lighting were ready to enhance the viewing experience.

They even have some new lighting technology and software. Instead of manually using the old lighting board to control the lighting systems, tech now has computer software which make special lighting effects easier to create.

While the lighting and sound booth gets to experiment with new equipment, the set crew morphed the empty space into a world of make-believe using vibrant colors, funky curves, and creative use of space. Building the set for “The Seussification of Romeo and Juliet” was one giant puzzle, and tech has had to find creative ways to fill the gaps.

“It’s great to incorporate so many different aspects of Dr. Seuss like the colors and shapes,” Sydney Holmberg said.  “It’s something that doesn’t happen a lot in theater, and this looks so appealing on stage because the goal is to be very colorful and vibrant and Seussy.”

“Suessification” is Schaumburg’s third production this year.  A fourth production, the yearly musical, will open later this year.