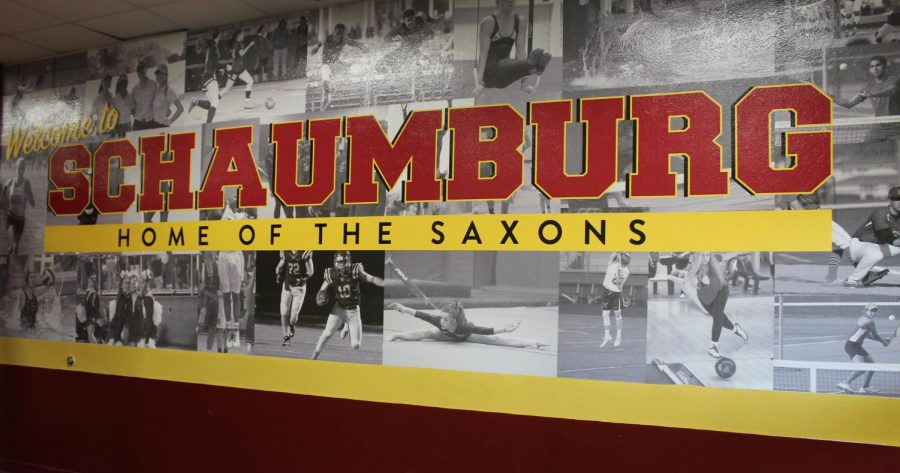 Updated athletic facilities offer a more enjoyable experience for both students and the SHS community.

Big things are happening in the athletic wing at Schaumburg High School. Upon entering the building, students are treated to a new, visually appealing athletic entrance that celebrates our SHS teams and athletes. The new entrance is just the beginning; several new projects have been completed.

In addition to the new entrance, the stadium received new turf, which will be ready for action for the September 14 football game against Highland Park High School. The Schaumburg High School stadium was at the end of its ten-year life span, and replacing the turf offered the opportunity to update plumbing and draining issues that created problems in past years.

“We’ve had flooding issues that shouldn’t happen on a turf field,” Athletic Directory Marty Manning stated. “After a rainy day, you couldn’t use the field for two or three days, but with new turf and drainage, we can use it the next day.”

Other important, but less apparent, field improvements include updated drainage and sprinklers for the baseball fields. Coaches and players alike acknowledge that the improvements will impact the efficiency of the teams and athletes.

“We are very excited about the installation of the new drainage system to our field, baseball coach Cal Seely said. “This has been a long-awaited and necessary project, but we are looking forward to taking advantage of additional practice time outdoors and making our field a true home field advantage.”

“We no longer have to travel to other schools’ baseball fields to play home games,” varsity baseball player Jake Golliher stated.

Track coaches are excited for the new track. According to track coach Robin Bingham, “The new track should alleviate some injuries for the runners. Visually speaking, the lines will be more defined, and since it’s now red, it won’t absorb heat as much.”

Anyone who visits the newly resurfaced tennis courts will immediately notice obvious improvements to the courts that had been showing signs of age. Whether or not you’re a novice or play regularly, smooth courts and clear lines help everyone.

Improvements were designed with the entire student body, and community, in mind. The updated turf, track, courts and fields benefit far more people than only our official SHS athletes. Along with the gymnasium floor, which was replaced last year, the Saxon community now has facilities that reflect a modern, progressive school.
“The stadium, including the track, is one of most heavily used spaces we have,” Principal Little stated. “Wellness classes, the band, and athletics all utilize the space.”

“From a community perspective, we now a beautiful field that we can use all day,” Mr. Manning stated. “When a school district has the resources, it is nice to know that they are willing to develop all of the facilities. We’re going to be celebrating our 50th anniversary in couple years, and like a house, we have to maintain, upkeep, and beautify our facilities.”

Make some time to visit and enjoy the new and updated spaces, Saxons.