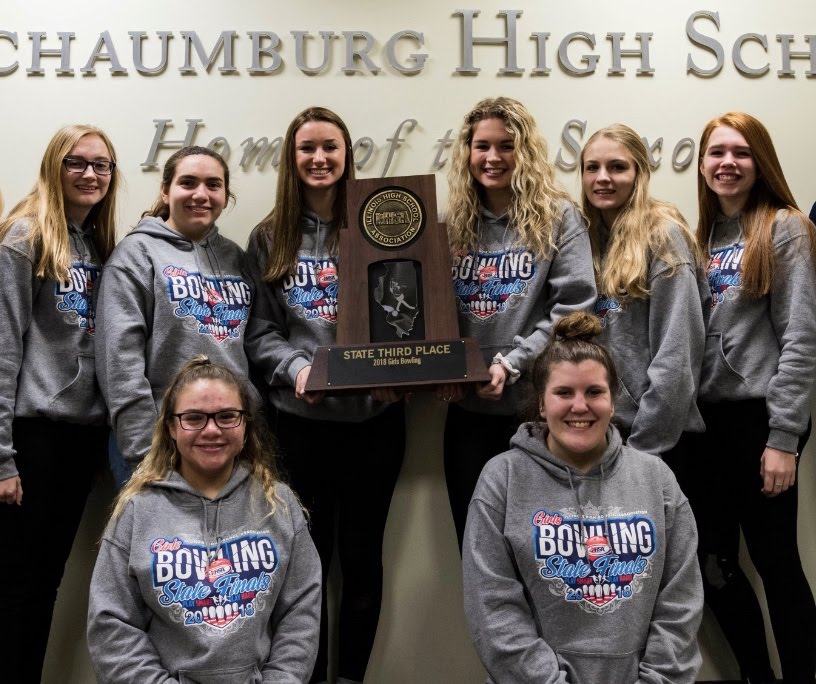 The SHS 2018 third-place state girls bowling team is back in action this year, hungry for even greater accolades.

Last year from, November through February, the Schaumburg High School varsity girls’ bowling team consisted of eight players that dominated throughout the season. Not only did they place in the top five in the MSL conference, they also placed third in state at the end of their season.

Successful high school sports teams typically consist of seniors. In recent years, there has always been at least one or two seniors on the varsity bowling team who would graduate and leave spots open for new bowlers the following year.

The team from last year was a rare one. It consisted of six juniors, one sophomore, and one freshman. As a result, the entire team will be returning this upcoming year and are a serious threat for a state title.

“The fact that we have the same team from last year is actually incredible because last year we really proved to everyone what we can do and we got third place in state for that. Now, we are coming back even stronger and hopefully we’ll claim more titles that show case how hard we work,” varsity bowler Cassidy Leno said.

The Saxon bowlers have definitely shown what they are capable of, and they aren’t afraid of any obstacles that come their way. But the competition is serious, as the Saxons will have to defeat the state runner-up Hoffman Hawks.

“Doing better than Hoffman this year would mean that we finally get what we believe we deserve,” varsity bowler Taylor Davis said. “Having the same team as we had last year gives us the advantage to conquer even more than we already have.  Teams should be worried this year.”

The consistency and team chemistry should prove to be a fortunate advantage for the team’s new head coach, John Slavic. The previous head coach, Mark Kelly, retired after many years of preparing and training SHS bowlers.  The girls, however, will not use this as excuse to justify any drop-off in their performance.  They believe that their best play is still ahead of them, and they are eager to go.

“I think having a new coach will do the team some good because we’ll experience new methods of coaching and new tips, which could always help us in the long run,” varsity bowler Sarah Bambas.

Good luck to our Saxon bowlers and stay tuned for more wins as they set their sights on state competition.