“Tartuffe” to open at SHS Theatre 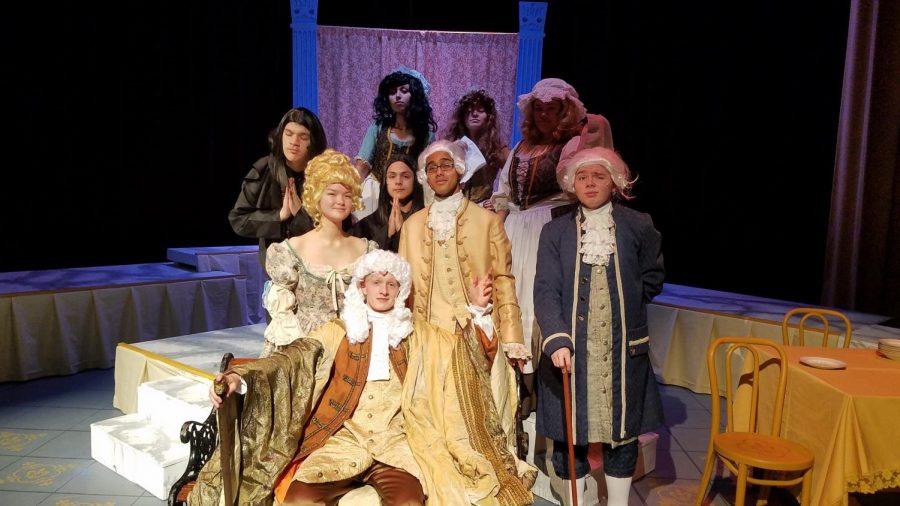 On November 15, 16 and 17, in the auditorium, the SHS Theater is performing Tartuffe, a slapstick comedy of errors. Set in 18th century Europe, the costumes are big and so are the laughs.  Tickets are$5  for students and $7 adults.

“This show is a comedy that has taken a classic piece of literature and shortened it to make it more accessible to everyone. It’s funny, slapstick if you will. There are great costumes, big wigs, lots of falling down and big caricaturized humor,” says Mrs. Micheletto, director of the performance.

“It is one of the best plays you will see. It’s got comedy, dark humor, which fits in perfectly, and it’s got some stuff that you don’t see coming. All the characters are really good and so are the actors playing them,” agrees sophomore actor Luke Locascio.

Written in 1664, Tartuffe is a timeless tale of love, deceit, and dark humor. The SHS theater troupe is presenting an abbreviated version of this story. In the play, Orgon, a man of great wealth, generously offers Tartuffe, a man he believes is equally pious, a place in his home.  However, it is soon realized that Tartuffe is an imposter who is using Orgon’s charity so that he can pursue his infatuation with Orgon’s wife and increase his wealth. Orgon, being the gullible person he is, is so impressed by Tartuffe that he arranges for the other man to marry his daughter.

“There are so many moments where you are laughing out loud. The acting is amazing. It’s a good concept, and who doesn’t want a good laugh?” freshman actress Abby Zelden states.

Recently, the SHS theatre has been full of comedy; Tartuffe is just as entertaining, but in a completely different way from what has been done recently.

“It takes the comedy to a darker side of things. It’s a funny play. But the funny part isn’t in the words. It’s in the reactions, and that’s something you don’t often see,” Don McCormick, sophomore actor playing Tartuffe, mentions. “It’s got physical humor and dramatic irony which both add to the overall dramatics of the play.”

Since September, the cast has been hard at work perfecting the performance, and now, since tech week is underway, they are giving the final push to make this performance spectacular.

Tech has been working hard to create a magical physical experience for the theatre goer. The set mimics an 18th century parlor and offers visual nuance to the production.

“I love theater in general,” Rose Gruenwald, senior and actress in this years fall play. “When I’m part of a production I appreciate it even more, as I see the background.”

Chieko Dunham, sophomore actress playing the part of Mariane says that “through acting, and just theater in general, you can express a message that someone else is trying to express through yourself, which is powerful and important, even in modern society.”

It is important for students to see a show SHS “because it illustrates skills and talents of students that aren’t showcased often at our school. It is such a fun way to support your peers, to come and enjoy a show, that has been put together with such hard work,” Aeden Humphrey, senior and actor, states.