Singing and Dancing When “Anything Goes” 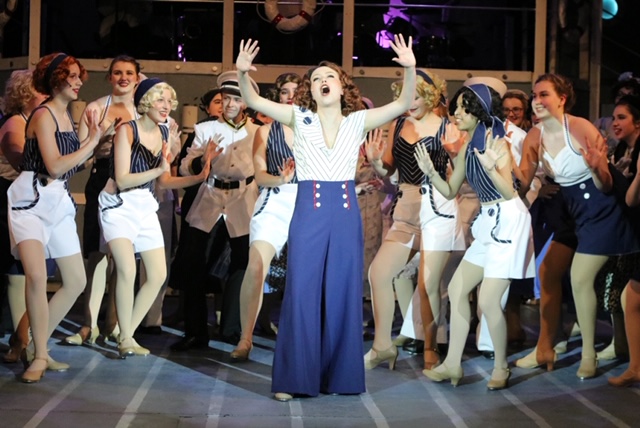 On April 25, 26 and 27, SHS singers, actors, dancers, and tech crew worked together to present the musical Anything Goes.  After preparing for weeks, the cast and crew delivered four public performances in 3 days–including an afternoon matinee hours ahead of their standard evening show.

Combining instrumentalists, vocalists, soloists, dancers, actors, and theatre technicians, and stagehands requires a large pool of talented individuals who are willing to work cooperatively. The group of over 50 students worked from January through April to make the show performance-ready. The results spoke for themselves.

Anything Goes takes place on a ship, the S. S. American, where famed nightclub star Reno Sweeney is traveling across the ocean to London. Her friend Billy Crocker has become a stowaway on the ship in order to win back his true love, Hope Harcourt. However, Hope is already engaged to another man. The musical, originally performed in 1934, follows these three characters, among others, and is full of comedy and dancing an audience is sure not to forget.

Obviously the decade, and musicals in general, may not be something that many people are familiar with.  It takes a great deal of practice and repetition to learn all the lines, songs, choreography, and blocking.

“I love to see the kids know nothing at the beginning of February, especially with an old show such as Anything Goes where they have little knowledge on the time period, and as we progress into April, they can put together something fabulous,” says Mrs. Noah, Director of the musical.

Because Anything Goes is so packed full motion and music, even younger audiences or people unfamiliar with musical theater can appreciate it.

“The show was fun and upbeat and packed with energetic dance numbers, lots of comedic relief, and a variety of costumes which are what I believe made Anything Goes such a success,” states Lauren Christians, junior actress and singer.

The SHS rendition of this classic did the original justice. From the singing and dancing, to the detailed set, the show kept audience members captivated from the beginning.

The musical not only leaves audience members with memories of an incredible performance, it gives its cast and crew a family.

“My favorite part about being in the musical is being able to connect with a variety of people from my fellow actors to techies and even the audience!” states Chieko Dunham, sophomore actress in the show.

It also gives all those involved a chance to be in a different world for a couple of hours.

“The best part of being in the musical is getting closer with people and being able to escape everything and just act and have fun,” Mia Arquila, a sophomore actress and part of the ensemble, notes.

That’s why theater is still just as important today as it was in 1934 when Anything Goes debuted, even in high school. It gives all those involved, and all those who watch it, an experience of a lifetime that won’t be soon forgotten.