Saxons set their sights on a playoff run 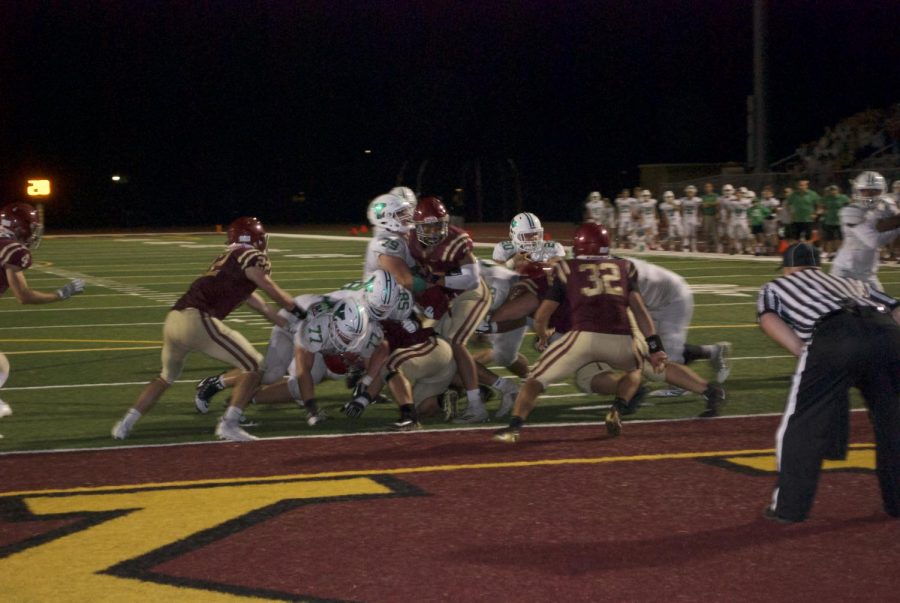 Saxons defenders attempt to keep a York ball carrier out of the end zone during a 16-13 week one overtime loss .

After a 4-5 record and missing the playoffs last year, the SHS varsity football team is off to a 2-1 start and looking to make a splash in the MSL West. This year, however, the team will need to overcome youth and inexperience to achieve their goals.

Despite the disappointing performance last year, Coach Stilling thinks they can compete in the playoffs. The team has added some talent to last year’s cast of players, including sophomore Takumi Fred and expect increased contribution from players like senior Tyler Madl. One player that looks to lead the team is the starting QB Luke Jessie, a junior,  who played wide receiver last year.

So this year, the Saxons look to compete for the championship. They have added players and are working as hard as ever to do well.

“Anything less than qualifying for the playoffs would be a disappointment,” said head coach Mark Stilling. “We believe we have the potential to compete for the MSL West championship.”

The Saxons will have obstacles like any team, but this year they are pinning the responsibility on themselves. They believe that they are in charge of their own fate.

“We need to practice and play with toughness and togetherness,” said Stilling. “If we can do those two things, I like what we can become.”

This year the Saxons are looking to play with size. Their QB Luke Jessie is 6’ 5”, tall for QB’s. Their offensive linemen are all 5’ 11” or taller, putting them among the largest in the MSL west. The main wide receivers are all six feet or taller, which will hopefully allow the offense to be more aggressive.

In week 1, the Saxons were disappointed after a 16-13 loss in OT to York. The team had two touchdowns both by the running back Mike DiGioia. Luke Jessie threw one TD to him and played a good game with the exception of an interception.

It became clear that the Saxons needed to play more aggressively. York took over the game after halftime and dictated the second half.

“There’s a lot to work on,” said Luke Jessie, “but I think the biggest thing is just doing whatever it takes to finish hard and come out with the W at the end of the day.”

In week 2, the Saxons came out on top early with a touchdown in only two plays. Takumi Fred got his first touchdown on the varsity team on a 45 yard rushing touchdown. Luke Jessie and Mike DiGioia both had huge games ultimately leading to 55-28 win against Wheeling.

Much of the offensive responsibility lies in the hand of quarterback Luke Jessie.

“A challenge is that when I played receiver, I only had to know what I had to do or where I had to be on any given play but as the QB, I have to know where each position is supposed to be lined up,” said Luke Jessie. “I can continue to work at getting better one day at a time and try to put my team in the best position I can to win each week.”

Another member of the offense who is facing a steep challenge that is going to affect a player on the team is sophomore Takumi Fred. He will have to face much tougher competition than most sophomores encounter.

“I think the most challenging thing that I am gonna face is definitely playing time and the change in intensity,” said Takumi Fred. “Except even though there is greater talent than me, I will stay technically sound and trust the skills I learned from all the coaches and former NFL players that coached me at camps.”

In week three, the Saxons took on Niles North and came out strong, leading to a 35-6 halftime lead. They never looked back and ended up winning by a score of 56-12. Luke Jessie played great, as well as the whole offense. The defense picked up a fumble recovery and stopped Niles North many times, only allowing 12 points in the whole game.

Next week the Saxons are playing at Deerfield in week four hoping to improve upon their 2-1 record. They are looking to be contenders this year and will let nothing stop them.