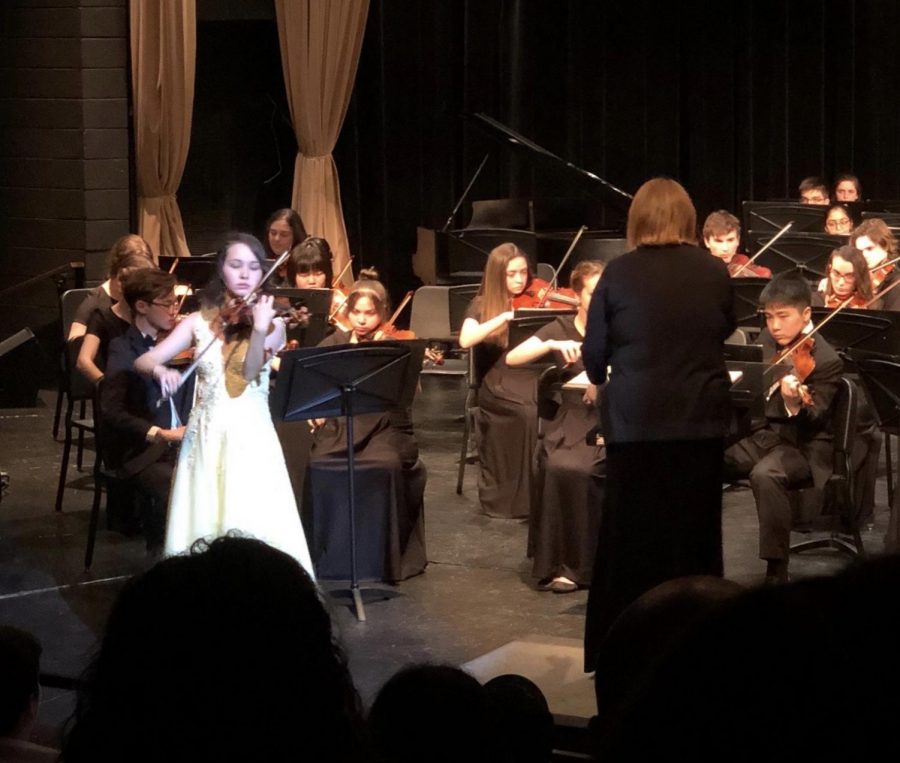 Band is intense. It confronts everyone in every aspect of life, and everyone is well aware that the band exists. As a member myself who devotes a lot of time to the program, like other band members, I have been immersed in music performance since the age of five years old. I started playing the oboe through school in fourth grade and have kept up with it since. However, band, orchestra, and choir students all experience completely different environments and forms of music education. I wanted to get a stronger sense of each, so Maika Edwards, an extremely successful and admirable violinist, sat down with me to give me a little insight in her world.

When did you start playing the violin?

Why did you start?

I was inspired by one of my friends.

Oh really? It was your choice?

Who was this friend that inspired you?

I forgot her name, but she was in Japan, and she was really good. I think I listened to her concert and was like, “I want to do that!”

How old were you at that time?

We were both in kindergarten.

So how was the process of starting the violin like? Did you take private lessons?

I just started with a private teacher.

Who was this private teacher?

She was a really good teacher in Japan.

Wait, were you born in Japan?

No, I was actually born here, and I moved there around preschool. I don’t really remember life before that though.

Was the environment different in music teaching, like private lessons and such, in Japan?

Not really. It’s mostly the same but it’s probably more strict over there.

So what was the first ensemble that you joined?

There was this little group that my teacher had. She made me join it, and it was really fun. It was this really big group, and we played like different pieces.

Does this relate to you interest in music in general, like why you do it? For fun?

Do you want to go into music professionally?
No. I want to do it for like—I don’t know. It’s always been my hobby, and I want it to stay that way.

So what are your future plans?

Oh really? So how would you continue music in that lifestyle?

Well, first of all, I really want to join the university orchestras, and I want to make groups like quartets and stuff.

What’s the best advice in music that’s been given to you?

I don’t listen to advice, so I don’t really know. Let me think.

Has your private lesson teacher, Mr. Matsunaga, ever given you some words to live by?

I don’t know. Instead of rehearsing, we just like to talk about music in general. By getting tips during lesson, it helps me practice by myself at home. But he does always tell me to have fun though; that’s the one thing he tells me. Whenever I’m nervous for competitions, he just tells me to have fun, and it actually makes me feel more relaxed.

What’s the most amazing or intense performance you’ve ever done?

Probably like Carnegie Hall. It was really different from other tours we’ve had. This one was different because it was one of the best halls in the world, and so many professionals have played there. One of my favorites, Midori Goto—a Japanese professional violinist—has played there. I just can’t believe I played in the same hall as her.

Didn’t you guys also play on Good Morning America, or am I making that up?

Was it nerve wracking knowing a lot of people might see you since many people watch Good Morning America?

Well, I wasn’t really nervous since I had other friends too; there were 3 other people playing with me. It was just too cold to even think about anything. I just wanted to go back to the hotel and keep warm. Also, we, the Midwest Philharmonic Orchestra and Conservatory, got a lot of customers and audiences because of that and the Carnegie Hall concert, so that was good.

What is your biggest takeaway from music since you are not going into music, other than as a major hobby? What has it done the most for you?

It has helped me in so many ways. I used to be one the shyest people you’d ever know (and I still am kind of), but through music, I learned to be more of a leader and speak up whenever I wanted to.

How have the relationships you’ve fostered through this world of music been like?

So you’ve used it as a way to connect with people you may not have ever had the opportunity to previously?

Yes, and I also met so many great conductors, and they inspire me to continue violin even when, sometimes, I feel like I don’t want to.

If there’s another creative person, past or present, that you want to interview, who would that be?

I really want to interview Sarah Chang. She’s my favorite violinist, and she’s been my inspiration since the beginning, since I started violin. I would want to ask her how she manages to stay as a musician because it’s really hard to be a musician, especially if you’re really well known like her. It must be really stressful, and she probably has anxiety too. I just want to know how she manages that and how she balances her private life.

What would you say to people that are thinking about music as an option but aren’t really certain?

I think, for me, I would say to just start it; just go for it. Honestly, you can’t do anything if you don’t even start it. See if you like it or enjoy it. If you enjoy it, keep continuing it. I had so many parts in my life where I was like “I want to quit!” Once I got to this point now, I wanted to keep doing it for the rest of my life as a hobby.

If you could be any animal in the world, what animal would you be and why?

I want to be a dolphin. First of all, I love swimming, and I want to swim really fast. Second of all, we don’t really go underwater a lot, so I want to know what life is like under the sea.

Describe the color yellow to someone who is blind.

Yellow is the color of the sun. Wait, no! The sun is red, right? Or is it orange, I don’t know. But it’s the brightest, happiest color that exists.

Is it your favorite color?

You are a new addition to the crayola coloring box. What color would you be and why?

I would be blue. Probably Sky Blue. I just like the color of the sky when it’s blue-y.

I always knew Maika Edwards was one of the best musicians to ever come into Schaumburg High School, but after hearing about her experiences, like at Good Morning America and Carnegie Hall, I am in even more awe than before. She has such raw talent, and it inspires me to take my extracurriculars and hobbies even further than I already am. I was so shocked when she told me she was not going into music professionally, but it makes sense—she has a genuine love for music making and wants to keep the excitement alive. If she goes into it as an adult, the amount of stress and pressure could be enormous, but she’s smart. She is amazing at what she loves and is planning on loving it forever, and music performance as a living is not the best avenue for that right now.