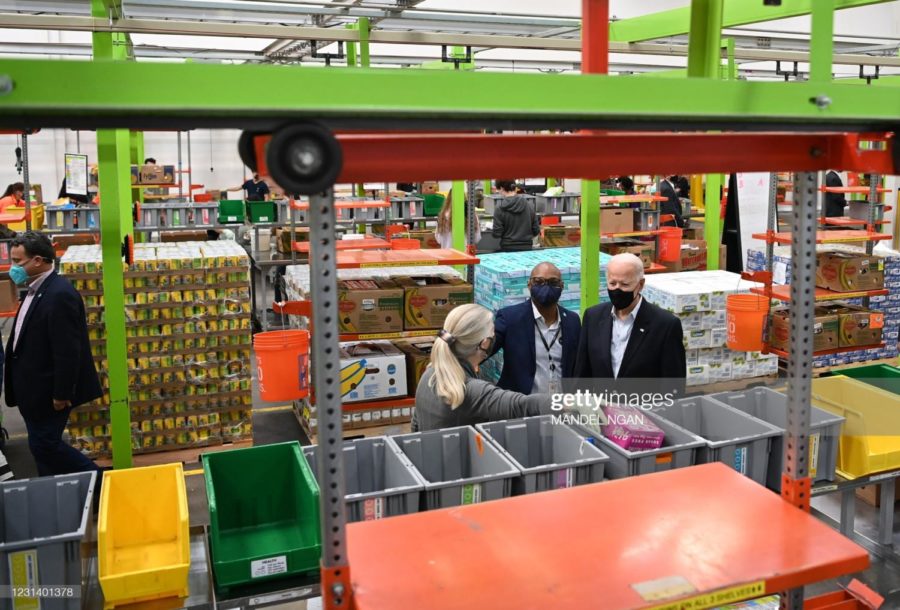 Above: President Joe Biden tours the Houston Food Bank due to the severe winter storms in Texas.

Winter storms spanning the continent have exposed the nation to what many contend are severe effects of climate change.  This has been especially dramatic in Texas, where water shortages and power outages have become a common from the rare harsh weather they faced.

Millions of Texas lost power in their homes, preventing them from heating themselves up against the bitter weather outside of their doors. Recovery efforts have been slow due to the lack of infrastructure, such as no snow blowers and salt. Additionally, due to blackouts, Texans have resorted burning wood to stay warm in the freezing temperatures. Floods caused burst pipes and ceilings to collapse, further worsening the horrible conditions.

Water systems also broken down due to the constant snowstorms. More than twelve million Texans suffered disrupted water systems, forcing authorities to issue boil water notices. Many systems have suffered malfunctions in water pressure rendering them unusable. Leaks and breaks are now more common, only proving that Texas’ infrastructure is unfit for these conditions.

Some blame the state government for their neglect,  underinvestment, and  lack of foresight which caused these problems to escalate.  Even a hospital had to move patients due to unclean water and undependable heating systems.

However, conditions are improving in Texas. Though certain state politicians have not done much to help, others, such as Alexandria Ocasio-Cortez, have raised money to help their fellow Americans. The Federal Emergency Management Agency has supplied generators to Texas along with diesel for backup power. Water and blankets are also being supplied to stay warm and survive. Though the immediate crisis itself is at an end, there are a multitude of effects that will take time to fix. Burst pipes in homes and businesses will need to undergo bacteriological sampling to prove the quality of the water.

This should be a sure sign to reform energy grids and make sure that utility companies implement the necessary fixes to ruggedize and strengthen the vulnerable systems. However, fossil fuel companies are fighting to maintain the profitable status quo. ERCOT, the Electric Reliability Council of Texas, distributes power from power plants to consumers. Members are now resigning from the council due to the blackouts and power failures.

Rural Texas is having a slower recovery rate and power did not return for weeks.  Repairs always begin by tackling easily accessible areas and then moving on to more difficult locations.

Texas’ crisis has been an eye opener for the entire country. Though some still doubt the effects of global warming, Texas’ conditions serve as example for the need for climate change reform and the necessity of infrastructure. Hopefully Texas and the country will be better prepared for future instances similar to these circumstances.