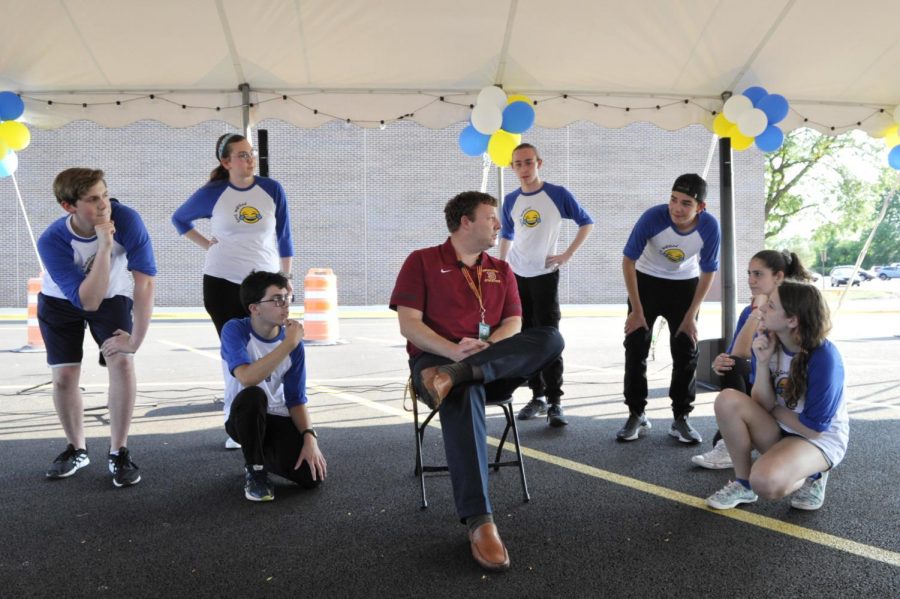 Chicago has a Second City Comedy Club, where actors such as Chris Farley, Mike Myers, and Amy Poehler began their careers as improv actors. Schaumburg High School has seen its share of improv comedy, as well.  On Thursday, September 9 at 7:00 PM, and Friday, September 10 at 4:00 PM, in the outdoor tent outside entrance 8, the SHS theater department performed its annual Scared Scriptless improv show.

Directed by Mrs. Micheletto and Mrs. Kern, the improv show, which featured seven SHS students, was a free, unique one hour experience filled with jokes, puns, quick punchlines, and loads of physical comedy.

“The show is just an amalgamation of insanity,” explains Madeline Hutchinson. “It is the greatest kind of chaos you can imagine.”

The show itself is exactly what it is called, improvisation.

The cast is “not given a script and told, here, do this. It’s more like, hey here’s an idea, go do something amazing with it,” notes Brandon Saam.

Improv requires the actors to always be thinking on their feet and always armed with a funny quip that will get the audience to laugh.

“You have to do a lot of trusting,” explains Mrs. Micheletto. “You’re up on stage without a script to back you up, so the cast has to fall back on each other.”

At an improv show, there’s different prompts and activities that the cast works off of. They then turn these suggestions into full blown stories that are hilarious to watch. Occasionally  audience members will be asked questions and such, and their answers will be incorporated into the show.

One of the show’s highlights saw Ms. Gbur’s and Principal Harlan’s respective weekends turned into a game that requires actors recreate a nightmarish version of events. Actors preform the skit with increasing speed and eventually perform the events in reverse.

“Its a one of a kind show; you will never see the same show again,” Abi Zelden notes.

“The show has a very unique dynamic and a very good one at that,” reiterates Brandon Saan.

The lack of script and general stage direction gives the cast much more creative freedom with their acting. It allows them to experiment with different characters and character types as they see fit. The interactions between those characters lead to an ever changing dynamic within the show.

While the improv show has passed, many other opportunities to become part of the SHS theater department will follow later this year.  Look out for chances to audition and join other Saxons on stage.