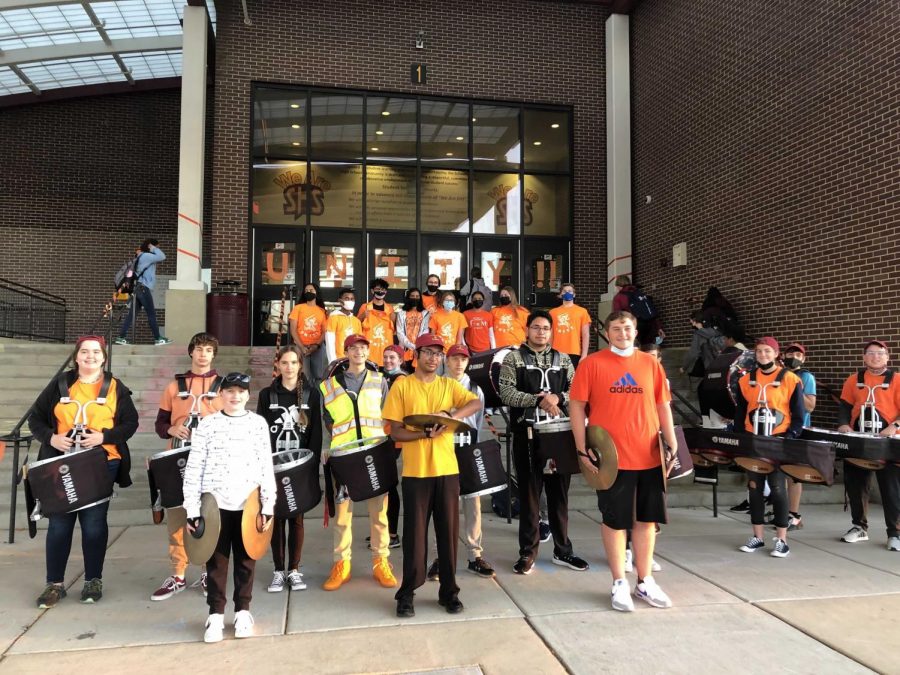 Members of the SHS drumline prepare for a Saxon Storm on Unity Day.

With all of the stress over Covid restrictions, college applications, practices, SAT tests, work, extracurriculars, and school,  life as a teenager can be overwhelming. When bullying is added to the equation, things can often feel hopeless.  So during the week of October 18, Schaumburg High School students took time to unite and say no more to bullying.

The other concerns may get a lot of attention from parents and educators, but this overlooks bullying.  Too often, such problems are assumed to be issues that only exist at the elementary or middle school level.  The fact that bullying has now become less visible to adults–with so much of it occurring online or on social media–makes it easier to overlook.

However, each year, more than one in five students surveyed report that they have been a victim of bullying, yet only 46% of victims of bullying reported the incident to an adult. Most students report that their physical appearance, race, ethnicity, gender, disability, religion, sexual orientation were the predominant targets of bullying. School anti-bullying programs can decrease bullying by 25% (National Center for Educational Statistics).

“Especially coming back from a year of being apart, we need to unite to help each other get reacclimated to school,” senior Saxons LEAD member Julia Wiecek said.

Students were asked to wear orange on October 20 to reflect their commitment to unity and to send a visible message that no one should ever experience bullying. On Unity Day, Wednesday, October 20, students were greeted at the main entrance by a Saxon Storm, as the SHS drumline performed. Students were handed pencils with messages on them as a reminder of unity and acceptance.

“We want to take an opportunity to unite as a school and show support for every individual in our SHS community,” stated club sponsor Rachael Kahan. “The goal is to educate students and staff about Bullying Prevention Month and to provide opportunities to engage in activities rolled in inclusion, acceptance, and kindness.”

All students were invited to decorate the school on Monday, sign an anti-bullying pledge, participate in the Saxon Storm, and purchase a flower to give to someone. Saxon LIFT and Sophomore Advisory classes completed lessons on bullying.

“We hope that people know the real reason behind unity week: bullying and cyberbullying,” Wiecek added. “Unity week spreads that awareness, and spirit weeks bring people together without being a popularity contest.”