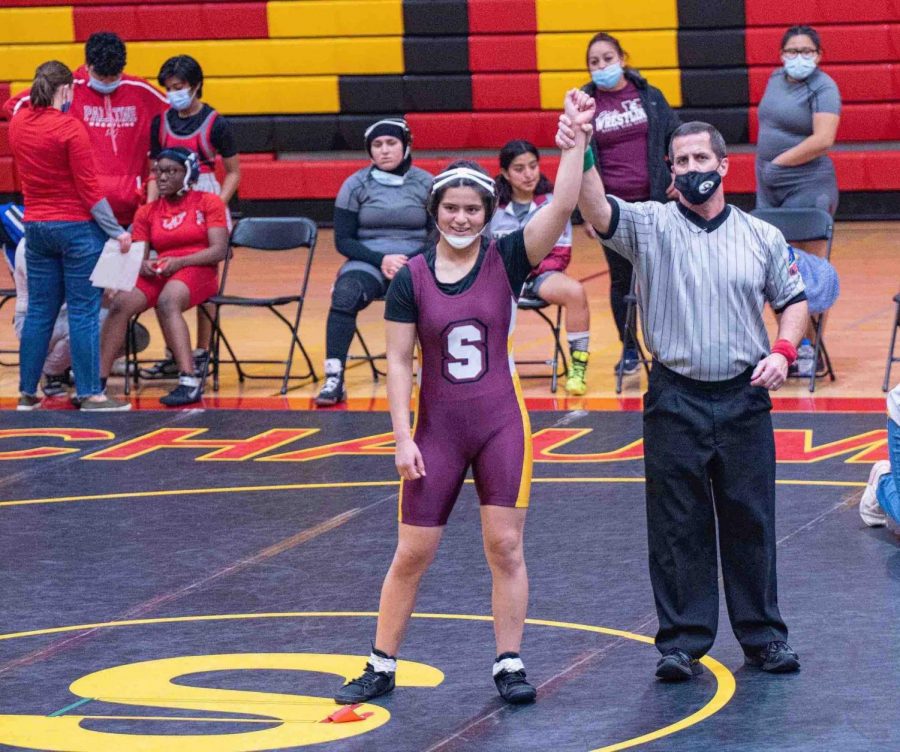 Valeria Rodriguez celebrates her victory at the SHS invite

Girls wrestling official emergence was long overdue.  Co-ed wrestling had previously existed, but as the number of girls participating in wrestling grew, they faced challenges within the co-ed sport. Conflicts surfaced as they struggled against common preconceptions.  Many people believed that male wrestlers are biological superior in terms of strength which ultimately put girls at a competitive disadvantage. Furthermore, there even developed a stigma concerning boys losing to a girl.

“Our state is one of the top states in girls wrestling in the country, but we haven’t had an official state tournament,” said Mr. Gruszka.

Wrestling for girls is snowballing across the United States. Some college programs already carry girls wrestling, and next year, Big 10 schools will make female wrestling an official sport.

“You can expect a large increase in the number of female participants once the larger universities begin to carry it,” explained Mr. Gruszka.

According to the rules of IHSA, girls are still allowed to wrestle in dual meets and tournaments with boys, as long as they abide by the weight class. At the end of the season, girls get to choose whether they would like to participate in the girls state tournament or boys state tournament. Last year,  80 – 100 schools were represented at the unofficial state tournament for girls. The state for girls this year expects to host the same, if not more, schools and wrestlers.

Within the past year, the number of girls participating at SHS has doubled from eight to 16 girls. The wrestling program is optimistic about the upcoming years and the numbers of girls that will get word of the sport.

“Girls wrestling is just something you have to give a chance. You can’t judge something unless you try it,” said Mr. Gruszka.

Valeria Rodriguez, a sophomore wrestler that placed 6th in last year’s unofficial state tournament, stated, “I thought wrestling would be bigger or well-known and a sport more participated in by girls, considering how much I actually ended up enjoying it. Now that we’re official, I can only hope for a lot more to come along the way!”

Wrestling can cultivate many beneficial skills that can help one  in everyday life. Within today’s world, wrestling can teach girls self-defense while they practice something they love to do. Moves within wrestling require practice with flexibility, but also requires the coordinated use of one’s entire body. A sense of self discipline, sacrifice, and confidence ensures from putting yourself out there in a standoff for six minutes.

“It’s awesome to meet new faces and watch and feel how hard other schools and teams work within a sport we all enjoy and relate to,” said sophomore Valeria Rodriguez.

Girls wrestlers prove everyday that they are just as strong as boys, refusing to stop despite the countless numbers of bloody noses or the black eyes that appear. They show critics everyday that girls aren’t too delicate to wrestle and that wrestling isn’t just a boys sport. Schaumburg’s girls team is ready to display results this season.