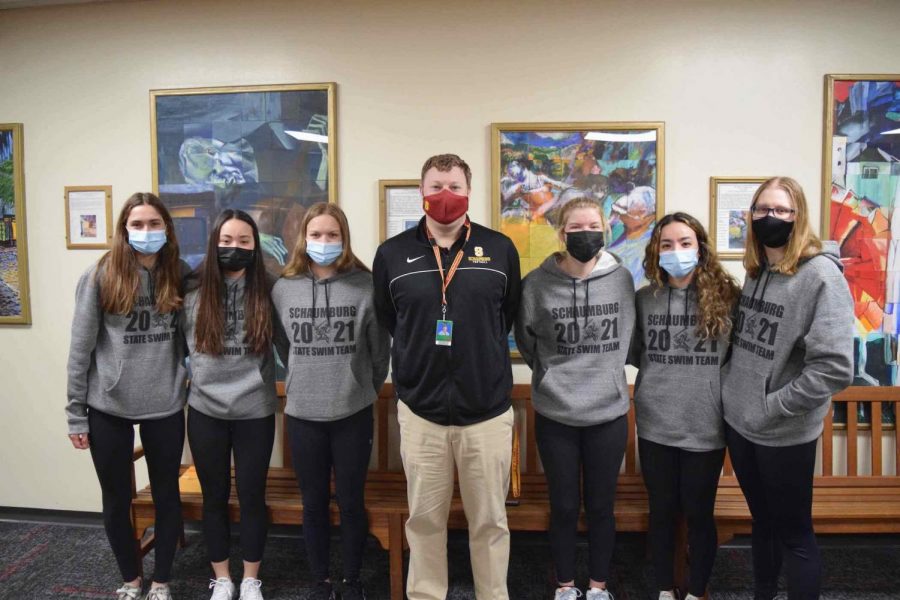 Five Saxons: Danielle Alley, Annabelle Banicz, Madison Dohrn, Nina Mollin, and Zuzanna Krasnicki, qualified for the State Meet. They raced eight events at prelims (the most in program history) and five at the State Championship Finals. The medley relay team finished 11th overall, and for the first time in school history, the 400-meter freestyle relay also scored points at the state meet, finishing 12th. This is the first time in school history that two Saxon relays have qualified to compete at the state meet.

“The key to our team’s success is the culture,” stated head coach Tim O’Grady.  “We have had a culture of fun and hard work for years.  This culture that the girls have strived for has encouraged every athlete at every level to do their best.”

Nina Mollin, who plans on swimming at the University of Toronto and training for the 2024 Canadian Olympic Trials, was the State Final runner-up in the 200-meter individual medley and earned 6th place in the 500-meter freestyle event. She is the second Saxon to qualify and place at the state meet all four years and is the first to score in eight different events.

“Going to state for two relays and two individual events made this season even more exciting because we had a whole team go to state, and we all had so much fun,” Mollin stated.

Madison Dohrn, who committed to swim at Iowa State, was also runner-up at the Finals, earning a silver in the 100-meter backstroke race.  That achievement makes her only the second Saxon to swim backstroke at the state meet three times. With a total of 41 points the 13th place overall finish was the school’s best since 1982-83.

“Being able to break all three of the relay records with Nina, Danielle, Annabel, and Zuzanna was really fun and exciting. And state was a highlight of the season, from the relays to the reached goals,” Dorhn added.

At sectionals, the team earned second place second, starting it off with a state qualifying time in the 200-meter Medley Relay–a new school record. Dohrn, seeded second going into the 200-freestyle race, narrowly defeated the Downers Grove North Swimmer for gold and a state qualification. In a phenomenal 200-meter individual medley performance she: slashed her previous school record, set a new pool record, and nearly broke the state record, earning Mollin the second seed going into the championship. She also qualified in the 500 free after cutting 6.45 seconds off her previous season best.

Freshman Zuzanna Krasnicki swam into a state qualifying time and a new school record in the 50-meter freestyle sprint. She was seeded 5th and ended up with her second State Final qualifying time. Dohrn was seeded second in the 100-backstroke and passed her competition in the final lap to finish 1st with a state qualifying and pool record breaking time. In the final race of the meet, the 400-meter relay team of Mollin, Alley, Krasnicki and Dohrn set a new school record.

“The records and wins are obviously so fun to watch,” O’Grady added.  “But, what is most rewarding is the girls leading each other.  Watching [the] kind of environment they created at Schaumburg gives me confidence that all these girls will be leaders in college and beyond.”