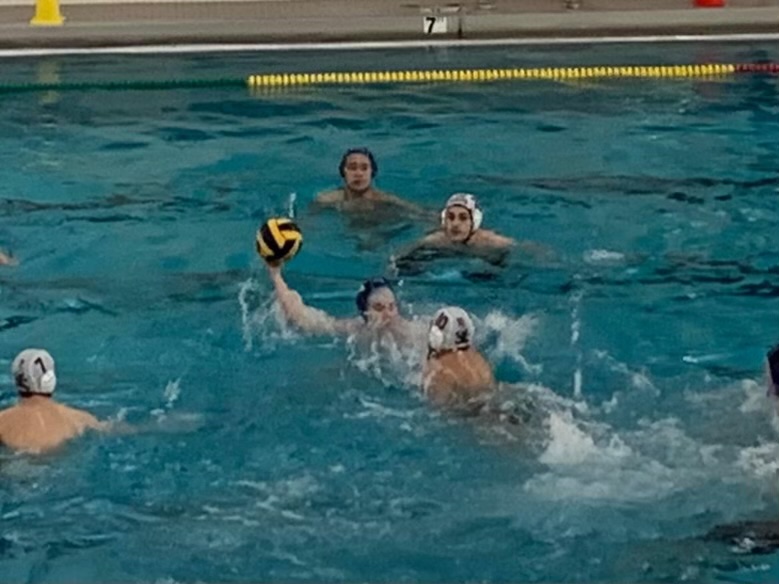 The SHS water polo team plays defense in their game against Prospect.

While the team has struggled to a 1-8 start to open the 2022 spring season at Schaumburg High School, the boy’s water polo team is enjoying a fresh start with the introduction of a new head coach, Tyler Clark.  Coach Clark strives to enforce a “winning mentality” within the relatively young group of players.

Coach Clark, an SHS alumnus, participated in both football and water polo during his high school career from 2008 to 2012, then continued to pursue football while studying at Rockford University. As a high school varsity water polo coach, Clark spent three years at Lincoln Park High School building an undeniably successful team, making it to the sectional quarterfinals round two years in a row and with consecutive winning seasons. Now, as Schaumburg High School Boy’s Water Polo head coach, Clark, along with returning assistant coach, Mr. Means, has big plans for the future of the program.

Relying on his “ability to develop players’ overall skill and increase their knowledge of the game,” Coach Clark aims to prepare the team for success by developing a drive to want to get better each day as a player and by improving the swimming and overall strength of the athletes.

Considering the lack of players in both the water polo and swimming programs  compared to other schools in the MSL Conference, Coach Clark encourages students and athletes of all experience levels to consider water polo.  Coming out to participate in water polo would help in a variety of ways, particularly the development of life skills as a swimmer and team player.

“[I’m] encouraging players to come out and try the sport,” said Clark . Water Polo “instills physical and mental toughness in a person and prepares them for the challenges in life [and] develops a lifelong skill in swimming,” said Coach Clark.  Developing as a water polo player can turn students into “one of the overall strongest athletes of all sports.”

“Water Polo is a unique and physical sport. Development will come the more you play,” Clark added.  Although the physicality can be a challenge, the coaching staff stresses “having fun and sticking with it” when it comes to younger players who may struggle with the physical demand of the sport.